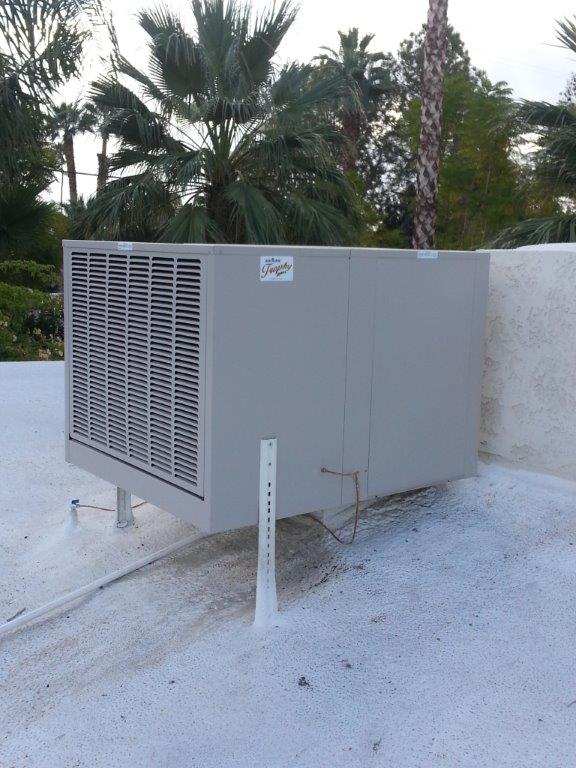 Evaporative coolers, also known as swamp coolers, use a duct and a fan to push hot air over a pad saturated with water, which is supplied by a water pump. The heat from the outside air causes the water in the pad to evaporate, adding moisture to the air and cooling it anywhere from 5 degrees at the lowest end all the way up to 40 degrees. The trick is, the hotter and drier the air, the more effective a swamp cooler is.

Since the Coachella Valley area averages 6 inches a year of rainfall, evaporative coolers work wonderfully here. With temperatures that almost never get below 40 degrees even in high winter, the area also tends toward getting very hot — which also argues in favor of using a swamp cooler.

To circulate fresh, cool air into the building, leave windows slightly open so that hot air can escape. This allows the denser, more moist and cooler air to push the lighter, drier and hotter air out. Unlike air conditioners, air is not recirculated but rather vented and replaced by fresh air from outside.

To save water and energy on moderate days, evaporative coolers may be used as fans.

You can open all the windows in your building, or concentrate airflow in occupied areas.

If you have security concerns about opening windows, up-ducts may be installed instead.

Compared to central air conditioning, evaporative coolers save approximately 50% on installation and 75% on energy costs.

We listen to your requests and guide you through every detail of the process. You choose the option that best fits your needs.